The final severe attack began one evening just after dinner, when I suddenly felt what I had come to call “the headache” beginning to pound behind my eyes. My eyes hurt, the light made me squint, and as usual with these headaches, looking at the source of any light (a lamp or light bulb) I could see rainbow-like halos around the outside edges of the light. My family sat down to dinner, and I took my meds and went to bed, where I stayed until the next morning. 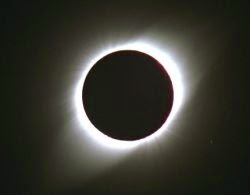 When I woke I knew something was really wrong. I was blind in my right eye, except for a sparkle of flashing colours around the edge of my vision. Looking straight out of my eye, with my left eye covered I could see only a black center, a halo of colours and black around the edges. The only way to describe it is that it looked exactly like a solar eclipse. I woke my husband in a panic; he looked at my face and went to tell the kids where we were going, and off we went to the emergency department – yet again. We were no more than five minutes from the hospital, and by the time we arrived I was already hoping that it was just another symptom of the diagnosed migraines.

Unlike my other visits, on this morning the emergency department was empty, and I was seen right away by the triage nurse, who immediately passed me onto a doctor, which is almost unheard of unless you land there by ambulance. The doctor re-measured my blood pressure, looked at my eye and turned on his heel and ran down the hallway to the office. I was beginning to feel much more alarmed than I was when I left home, but the on-call doctor returned fairly quickly with a bottle of eye drops. 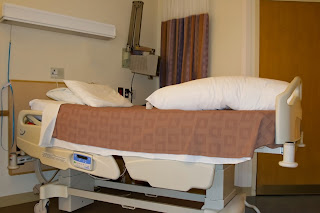 Sitting down in a chair he lowered the bed and explained that he had called an eye specialist who prescribed the immediate use of these drops – two in each eye, and who requested I be moved into one of the special examining rooms. As he pulled open my blind eye to put in the drops the doctor indicated that they would probably hurt a little – and he was right. They stung – in fact they stung quite badly. He called a nurse and they helped me to an ophthalmic examining room, laying the chair flat and covering me with warm blankets. He said if the specialist hadn’t arrived in half an hour, he’d be back with the next round of eye drops – he turned down the lights so it was nearly dark in the room, went out and closed the door behind him.

There I lay in the darkened room, shivering under the blanket – tired, frightened, and in pain, with no clue what the problem really was yet.


The eye physician arrived shortly after that and went about doing whatever they do – the testing, the lights, and so on – it took a long time – many different eye drops, many sharp flashes of light coming through scopes, more drops more testing, and then … more of the drops that stung. That went on for most of the day.

After the first round, he told me I had Glaucoma, and explained the acuteness of this current attack, and the treatment right now would be the drops, every half hour until the eye pressures dropped. He explained what glaucoma was – fluid pressure in the eye – and that it could be caused by eye trauma (I had none of that), or it could be hereditary (nobody in our family at that time had it, or knew they had it) or, it could just be a sudden onset and that’s what it appeared mine was.

Then he told me that from the testing he’d done, and what he’d been able to see through the scopes … I would probably always be blind in my right eye. The optic nerve was badly damaged, and would probably never be restored. He said my vision might improve in a few days to where I could see shapes and colours, but he felt that would be unlikely. I went home at the end of the day (still in pain from the eye drops) with prescriptions for eye drops Pilocarpine Hydrochloride and Timolol, and Travatan (which I no longer use). The angry headache had disappeared, to be replaced with a fatigue I couldn’t fight. I followed the instructions for the drops and went to bed.